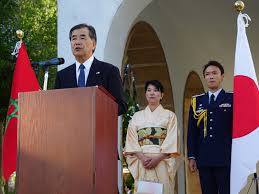 Japanese ambassador to Morocco Takuji Hanatani has affirmed that his country “has never recognized and will never recognize” the self-proclaimed so-called SADR, noting that Tokyo has always supported the UN Security Council resolutions on the Sahara.

Mr. Takuji Hanatani made the remarks at a meeting held Thursday in Rabat with Speaker of the House of Representatives Habib El Malki.

The Japanese diplomat said the stand of his country on the Sahara issue remains “constant and unchanged”, stressing that the phantom entity is not invited to the Tokyo International Conference on African Development (TICAD).

Only the 54 countries recognized at the international level as members of the African Union will attend the 7th TICAD due in Yokohama Aug.28-30, underlined Mr.Hanatani.

This means that the so-called SADR, which is funded, armed and sheltered by Algeria, is excluded from the TICAD meetings.

The Japanese ambassador also hailed the call launched by King Mohammed VI to Algeria to open a direct dialogue, expressing hope that relations between the two Maghreb countries will improve, which will contribute to the resolution of the Sahara issue.

Regarding Morocco-Japanese relations, Mr. Takuji Hanatani said the Kingdom is the second major destination of Japanese investment in Africa, noting that 68 Japanese companies are operating in Morocco and employing 40,000 people in this country.

For his part, Habib El Malki underlined the sustained efforts made by Morocco to reach a definitive solution to the artificial conflict over the Sahara, reiterating the Kingdom’s commitment to the UN settlement process.