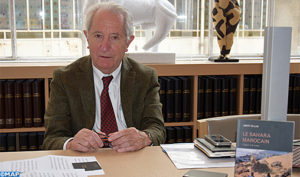 The case of missing Polisario member Ahmed El Khalil is being taken to the International Criminal Court (ICC) and the UN Human Rights Committee in Geneva. French lawyer and author Hubert Seillan declares he is to take the action.

According to Maghreb Arab Press, El Khalil’s family asked the French lawyer to take on the case after he brought it to light at the UN 4th Committee in October.

Disappeared since 2009, Ahmed El Khalil a leading Polisario member was said to be kidnapped by Algerian intelligence services and the Polisario Front just two months after Polisario appointed him to monitor human rights in Tindouf camps.

He was scheduled to give a lecture in Algiers, denouncing the system, when he was arrested. Since then, his family was with no news from him.

For several months, Khalil’s relatives have been protesting his forced disappearance in Tindouf, calling on the Polisario front to disclose information on his whereabouts.

Hubert Seillan, lawyer at the Paris Court of Appeal, explained that he met Khalil’s family during one of his trips to Smara. And it was there that two of the missing man’s brothers asked him to defend El Khalil’s interests. The lawyer said that he started the procedure by sending a complaint to the prosecutor in Algiers. As yet he has received no response. “I am currently considering filing a complaint with the International Criminal Court and the UN Human Rights Committee in Geneva,” he said,

He added that he will give the case “all necessary attention.” Khalil was born in Tan-Tan in southern Morocco. He decided to join the Polisario in 1977.