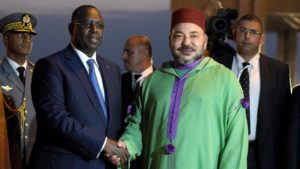 Morocco is hosting from November 13-16 the 12th annual international Forum MEDays. The event takes place in Tangier and gathers delegations from more than 80 countries worldwide.

Among the guests of honor is the Senegalese President Macky Sall, who was bestowed the MEDays forum ‘s grand prix in recognition for his commitment to the development of his country and the consolidation of peace and stability in Africa. Macky Sall reiterated the strength and depth of Rabat-Dakar relations that he described as a “historical relationship.”

These longstanding ties with Senegal and West Africa were cemented by Islam and centuries-old trade traditions, he said.

He also lauded King Mohammed VI for his continental leadership and farsightedness describing him as a “champion of African unity” and commended Morocco’s African foreign policy thanks to which “the country retrieved its natural role in Africa.”

Many sub-Saharan personalities are taking part in the Medays forum that is debating a set of issues pertaining to Africa’s sustainable development, economic integration and south-south cooperation.

Morocco is known to be a powerful drive of the strengthening of south-south Cooperation.

Morocco’s intra-Africa trade accounted for 8% of total exports, and for 4% of total imports in 2018.

The 12th annual international Forum MEDays is a very good opportunity for the participant countries to set new objectives for bilateral and multilateral trade cooperation.