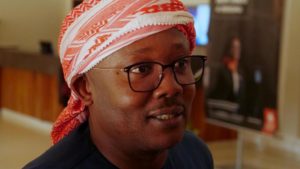 President-elect of Guinea-Bissau, Umaro Sissoco Embalo has started a regional tour to boost ties with his regional counterparts.

In Senegal, first stop since he was announced the winner of the election rerun last week, Mr. Embalo met with president Macky Sall in what the Senegalese presidency said was: “A sign of recognition for the Head of State who supported him a lot during the difficult times.”

On Saturday afternoon, President Umaro Sissoco Embalo landed in Brazzaville where he held about one-hour talks with President Denis Sassou-Nguesso.

About the reason for his visit, Sissoco Embalo told the press that “everyone knows that I am an adopted son of President Sassou. It is the least of the things that I come to bow to my father after my election to take blessings and especially his advice.”

On Sunday, Embalo was in Abuja, where he met with Nigerian president Muhammadu Buhari, Nigeria’s Foreign Affairs Minister and Buhari’s Chief of Staff.

Before his inauguration on February 15, the new president of guinea Bissau also plans to visit Cape Verde for talks with President Jorge Carlos Fonseca, acting Chairman of the community of Portuguese-speaking countries.

In statements to the media during his tour, Sissoco Embalo promised to work for unity and peacebuilding in his country marked by recurrent crises. “I have made a commitment to form a government of national unity in which everyone will be represented. This is how you can develop a country,” he said.

Regarding his quarrel with Guinean President Alpha Condé who has reportedly opposed his election, he assured that this incident was now closed. “With President Alpha Condé we are colleagues today. I cannot speak of him today. There have been campaign statements. Today is different. Here ! There is no permanent enemy in life,” he said.

Embalo, 47, takes over from Jose Mario Vaz, who came to power in 2014 on hopes of stabilizing a country notorious for coups since gaining independence from Portugal in 1974.

Embalo’s prime task will be to deal with an ailing economy and a legislature dominated by the PAIGC — the African Party for the Independence of Guinea and Cape Verde (PAIGC), which led an 11-year armed struggle to end Portugal’s colonial rule.

Nearly 70 percent of Guinea-Bissau’s 1.8 million people live on less than $1.90 (€1.69) a day. The country has long been beset by corruption and drug trafficking. In the 2000s, it became known as a transit point for cocaine between Latin America and Europe as traffickers profited from corruption and weak law enforcement.