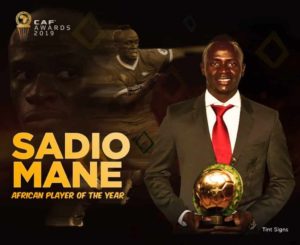 Sadio Mané has been crowned 2019 CAF African Player of the Year. The speedster edged Liverpool teammate Mohamed Salah – winner in 2017 and 2018 – and Algeria’s attacker Riyad Mahrez to the prestigious award

The Senegal forward received his award from the four-time winner Samuel Eto’o at a star-studded ceremony in the Red Sea resort of Hurghada in Egypt, which was also attended by the former Arsenal manager Arsène Wenger, although Salah was not in attendance.

Mané, 27, helped the Reds to the 2018-19 Champions League title, scoring 30 goals in all competitions last season. He has scored 15 goals so far in 2019-20, with Liverpool 13 points clear at the top of the Premier League table.

“I’m really happy and proud to win this. Football is my job, I love it,” said Mané.
“I would like to thank my family, my national team, staff, the federation and Liverpool Football Club. It’s a big day for me.”

As a reminder, Mané has finished in the award’s top three for the last three years, and has long targeted the prize.