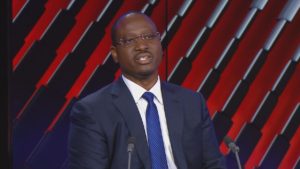 Former Ivorian rebel leader Guillaume Soro on Tuesday said he would not drop out of presidential elections set for the end of the year, despite an arrest warrant against him.

Ivorian public prosecutor issued a warrant for Soro on Dec. 23 as part of an investigation into an alleged coup plot. Soro denied any wrongdoing and said he was a victim of judicial persecution.

A scheduled return of the former rebel chief to Côte d’Ivoire after a six-month absence has raised tensions in the country whose 2010-2011 election ended in deadly violence between rival supporters.

“I definitely remain a candidate in the election. Those who tried to stop me from going back to my homeland will not stop me from being a candidate,” he told reporters in Paris on Tuesday.

Soro added that his lawyers had placed a request with French prosecutors for his rights to be respected, and will do the same with the regional West African Court of Justice, the African Court on Human and People’s Rights, and the United Nations.

Soro is a former ally of incumbent President Ouattara, but the two have since fallen out, reportedly over Soro’s own presidential ambitions.

President Alassane Ouattara won re-election in 2015 but has been unclear about whether he will seek a third term.

Political analysts say Soro is popular in particular among young Ivorians, but there are no independent opinion polls to estimate his support nationwide.