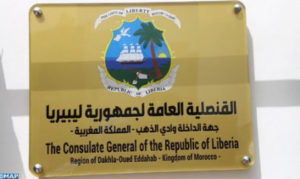 As announced last week, Liberia has strengthened its diplomatic presence in Morocco with the official opening this Thursday of a consulate in the southern city of Dakhla.

The opening ceremony was chaired by Liberian Foreign minister, Gbehzohngar Findley, in the presence of his Moroccan peer, Nasser Bourita.

In addition to the embassy in Rabat and a consulate in Casablanca “we intend to upgrade our relations with Morocco and extend our services to new regions of the Kingdom,” The Liberian Foreign minister had said last week during a visit to Morocco, announcing the setting up of a consulate general in Dakhla.

The decision will further develop the long-standing bilateral relations between Liberia and Morocco, the Liberian top-diplomat had said.

Liberia brings to ten the number of African countries that have opened consular representations in the Moroccan Sahara. These are the Comoros, Sao Tome and Principe, Gabon, Central African Republic, Côte d’Ivoire, and Burundi, which have consulates in Laayyoune, and Gambia, Guinea, and Djibouti which chose to open their consulates in Dakhla.