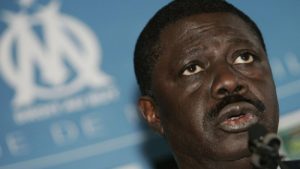 The 68-year-old Diouf is Senegal’s first COVID-19 fatality. He was being treated at Fann Hospital in the capital, Dakar.

Mr Diouf, a Senegalese national who moved to Marseille as a teenager, was president of the football club from 2005 to 2009.

Diouf became the first black president of a first-tier European club when he took the position at Marseille in 2005. Previously he had been a journalist and football agent, with Marcel Desailly, Basile Boli, William Gallas, Samir Nasri and Didier Drogba among his clients.

Marseille shared emotional posts on Twitter on the death of the ex-boss.
”It is with great sadness that Olympique de Marseille learned of the death of Pape Diouf,” posted the club late Tuesday.

”Pape will remain in the hearts of the Marseillais forever, as one of the great architects in the club’s history,” they added.

Senegal has reported 175 cases to date with 40 of them said to have recovered.

Mr Diouf was among two severe cases reported in the country. He was in intensive care and was about to be evacuated to France but his frail state made it difficult, according to state media.