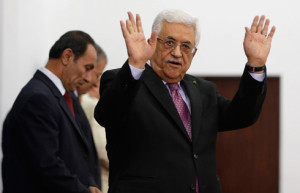 Palestinian president Mahmoud Abbas came under criticism for cooperating with Israel to search for the three Israeli teenagers missing. The president told the Organization of Islamic Cooperation in Jeddah that he is doing it to save Palestinians because Israel wants to inflict pain on them. Although a group is yet to claim responsibility, Israel claims that they are kidnapped by Hamas.
Israeli authorities stated that three teenagers went missing on their way home from Jewish seminaries in the West Bank. Thousands of soldiers have been deployed in the area to search for them making it the most extensive military ground operation in more than five years. Almost 300 Palestinians have been arrested.
President Abbas considers his cooperation with Israel as a necessity because “we don’t want to go back to chaos and destruction, as we did in the second [Palestinian] uprising.” Senior Arab leaders are not in support of the cooperation but Abbas warned that the failure to cooperate could lead to another uprising “that will destroy us.”
His open and frank position was not welcomed by Hamas. Abbas further stated that Prime Minister Netanyahu wants to exaggerate the kidnapping to inflict pain on the Palestinians. Abbas’s comments drew condemnation at home and highlighted one of his most controversial policies, working with the Israeli military to keep Hamas, which Israel accuses of carrying out the kidnapping, in check.
Fatah and Hamas have recently concluded a unity deal but Israel is openly against it. Hamas criticized President Abbas comments and termed it as a “Zionist narrative.”
The security cooperation between Abbas and Netanyahu is expected to continue despite the absence of any firm evidence to proof that Hamas has played a role in their abduction.