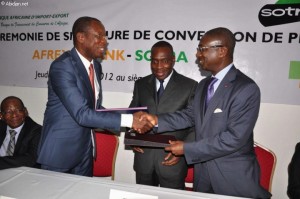 After signing in September 2014 an agreement for the opening of a branch of the institution in Abidjan, the African Export-Import Bank (Afreximbank) has said this week in a statement that it had signed a loan agreements for a total amount of € 159 million with four Ivorian public companies to support their investment programs.

In the statement released earlier this week, the institution said it had granted a credit facility of € 50 million to the Autonomous Port of Abidjan, as part of a loan of 200 million euros to finance the construction of a second container terminal of the Port.

A loan of € 50 million has been granted by Afreximbank to the public transport operator in Abidjan Sotra Ltd to finance an “acquisition of 500 additional buses and 12 water tankers and a new ticketing system” said the statement of the Pan African institution based in Cairo.

Afreximbank has also granted a credit facility of € 30 million to the National Investment Bank (NIB) to help “finance small and medium Ivorian firms that cannot meet the criteria for access to direct financing “.

Finally, a loan of € 29 million was awarded to the Ivorian Company for Textile Development (CIDT) to fund “the purchase of inputs and cotton seeds for his crop.”

These credit facilities are located in the “country’s program for Côte d’Ivoire”, approved in 2013 and has a budget of $ 550 million. This program, which lasts three years is to “support and facilitate the economic recovery of the country after the prolonged political crisis it has known.”

Note that since its creation in 1993, Afreximbank has provided funding of $ 28 billion to African countries.