Boko Haram’s allegiance to the Islamic State has been seen as a sign of weakness after international forces took over some of the territories it was controlling. Nigeria delayed its elections by six weeks so that the armed forces can fight against the extremist group and reduce the risk of the elections being disrupted. 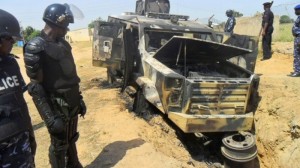 In the audio message posted on twitter, Boko Haram’s leader Abubakar Shekau pledged allegiance to the Islamic State and vowed to “hear and obey in times of difficulty and prosperity, in hardship and ease, and to endure being discriminated against, and not to dispute about rule with those in power, except in case of evident infidelity regarding that which there is a proof from Allah.”

The announcement of the allegiance was seen as a propaganda move that is meant to cause more “fears and terror” among Nigerian citizens according to Acting Director, Army Public Relations, Col. Sani Usman. He was speaking on the Hausa service of BBC when he stressed that “with or without allegiance to the ISIS,” Boko Haram knows that its days are coming to an end and Shekau will either surrender or be killed in the joint military operations. He claimed that “all the insurgents’ training camps and hideouts in the affected North-East have been destroyed” and other militants of the group have ran away leaving behind operational vehicles, arms and ammunitions.

Some experts think that Boko Haram’s allegiance to the Islamic State is a desperate option because it was criticized by Al-Qaeda after it kidnapped the Chibok schoolgirls in April last year.

Chad, Cameroun and Niger have all mobilized their forces to fight against Boko Haram henceforth considered as a regional menace.