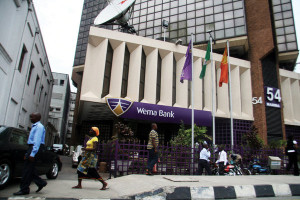 The Nigerian bank Wema Bank has announced on April 22nd, in a statement, a pre-tax profit of 615.28 million naira ($ 3 million) in the first quarter of the current year, representing an increase of 4% compared to the same period last year.

Revenue also rose to 8.92 billion naira in the three months to end of March from 8.30 billion naira last year, the bank said in a statement

In its Q1 2015 financials, Wema bank had interest income grow by 8%, interest expense was up by 16% hence, net interest income grew slightly by 1%. Operating expense slipped by 1%, while loan loss expense dipped by 71%. Loan & advances declined by 10%, while deposits also dropped by 14%. Net assets however inched up by 1%. View details of the result below

Wema Bank has announced on April 2nd that it would increase its capital by $ 251 million in at least two times during the year 2015. The bank listed on the Nigerian Stock Exchange will launch, initially, a capital increment of 2.100 million Naira in the second quarter 2015 to consolidate its loan portfolio in foreign currency.

It also plans to carry out a capital increase reserved to strategic investors for an amount between 30 billion naira ($ 151 million) and 40 billion naira.

Licensed by the Central Bank of Nigeria (CBN) and listed at the Nigeria Stock Exchange (NSX), the Bank provides the Nigerian public with diverse financial and business advisory services.