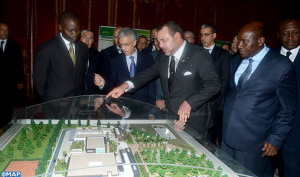 King Mohammed VI of Morocco wound up on Friday his several-day African tour that took him successively to Senegal, Guinea Bissau, Côte d’Ivoire and Gabon, a tour that translated again the Moroccan sovereign’s firm belief that Africa is capable of achieving development miracles through its own means and through inter-African partnership.

The royal tour, conducted under the sign of social, human and Economic development, gave additional evidence to Morocco’s determination to strengthen its historical ties with Africa, to build up a mutually beneficial cooperation with African countries, to contribute to their development, and to improve the well-being of African populations in the frame of a shared and active African solidarity.

The projects launched and the agreements signed during the King’s latest visits to Dakar, Bissau, Abidjan or Libreville give the full measure of Morocco’s commitment to upgrade its economic, trade, cultural and human ties with these States and to strengthen thereby South-South cooperation.

The various agreements signed during the royal visits covered all areas of cooperation ranging from investment protection, security and local governance, to agriculture, maritime fisheries and aquaculture, infrastructure, health, mining, handicraft and social economy, water and electricity, solar energy and vocational training in addition to trade, finance and banking.

All the agreements provide for the exchange of know-how and expertise in areas where Morocco’s performance is internationally recognized, such as economic, industrial and human development, foreign investments promotion and infrastructure upgrading. The agreements also place the human element and community development at the heart of the cooperation process. In this vein, Morocco contributes through its public and private sectors to projects meant to upgrade infrastructure, boost economy, and improve social services (health, education, electricity and water supply, vocational training etc.) changing thus Africans’ life for the better.

One of the State-owned groups that illustrate best this resolve to materialize Moroccan-African multidimensional cooperation and South-South partnership is Morocco’s phosphates group, known as the OCP.

The Group which launched several partnership projects with African States over the past few years announced early May during the Clinton Global Initiative Middle East and Africa meeting held in Marrakech a major commitment to support African smallholder farmers, through a three-year program worth $5 million.

The OCP-CGI commitment, titled “Enriching Smallholder Farmers in Africa”, is designed to address the chronic challenges that African smallholder farmers face in accessing affordable, appropriate fertilizers specific to their crops and soils, and the range of services and support they need to translate these productivity-enhancing inputs into higher farm productivity and, thereby, higher incomes.

According to an OCP statement, the group will ensure over the next 3 years that 100,000 farmers in six countries in West and East Africa will have reliable, affordable access to appropriate fertilizers and related products and services to boost their productivity and incomes. This commitment is part of a much larger corporate commitment by OCP to enhance the prosperity of Africa’s farmers, by harnessing their potential to feed their fellow Africans and contribute to feeding a growing world population.

OCP is thus the first major fertilizer company to build large scale fertilizer plants to be uniquely dedicated to the African market, with flexible capacity to produce diverse mixes of fertilizers that are appropriate to African crops and soils, says OCP Chairman & CEO, Mostafa Terrab.

Other major Moroccan groups, such as Maroc Telecom, Addoha, Alliance, Attijari Wafabank, BMCE, Saham Assurance are operating branches or carrying out projects throughout west and central Africa at the instigation of King Mohammed VI who places Africa at the core of his country’s foreign strategy, out of his firm belief in the continent’s potential and ability to achieve miracles.