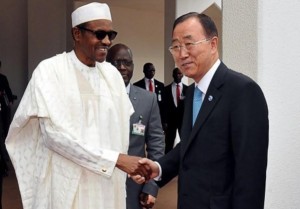 “I’m convinced that when you change Nigeria, you will also change Africa,” Ban said after meeting Buhari, who has said unchecked corruption could destroy Africa’s oil giant.

He said the two men discussed security and development issues “including the cause of troubling levels of violence and terror perpetuated by Boko Haram in northeastern Nigeria and beyond”.

The United Nations would also work with Nigeria “to address and counter extremism and terrorism”, he added, reiterating calls for the unconditional release of over 200 Chibok schoolgirls abducted by Boko Haram 500 days ago.

Ban said “it is intolerable that their lives have been interrupted in this way.”

“The humanitarian situation in the northeast is particularly worrying. We are working with partners on the ground to scale up humanitarian operations,” he said.

Ban also pledged to strengthen democracy in Nigeria after a peaceful election brought President Muhammadu Buhari to power in March. It was the first democratic transfer of power in Africa’s most populous nation.

“I hope that this example will be emulated by many countries around the world … I want to commend the people of Nigeria on the peaceful, free and fair elections,” Ban said in Abuja after meeting Buhari.

“For the first time in Nigerian history, a sitting president ceded power to an opposition candidate in a democratic election,” the UN Secretary General noted.

Replying to Ban’s speech, Buhari said they had discussed “the difficult time in which Nigeria finds itself, the destruction of infrastructure especially in the northeast, the rehabilitation of infrastructure, and the welfare of the more than 1.5 million internally displaced persons that have to be morally, physically and materially rehabilitated.”

Ban paid tribute to 23 colleagues killed four years ago when a Boko Haram suicide car bomber smashed through the barrier and exploded into the reception.