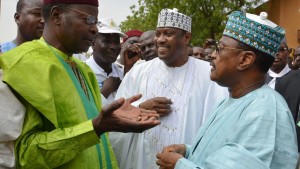 Thousands of people have taken to the streets in Niamey, the capital of Niger, to protest vote preparations.

The protests were held on Sunday, when mostly young men marched on the capital carrying banners with slogans calling for clean elections, rejecting dictatorship and demanding a full audit of the electoral rolls.

Next year, Niger, the world’s fourth largest uranium producer is set to hold parliamentary and presidential elections. President Mahamadou Issoufou, who has been running the country since 2011, is reportedly set to run for another term. He is widely expected to triumph over a fragmented opposition.

Opposition parties have regularly criticised vote preparations, alleging that thousands of people have been excluded from a national census, and condemning delays in merging voter lists.

Under a new voter registration process, some 7.5 million people in a population of 17 million are expected to be eligible to vote in the upcoming elections.

Last June, Niger’s fragmented opposition formed a coalition with the aim of ensuring that elections early next year will not be “commandeered” by the incumbent president.

The former French colony has not achieved a smooth transition of power through elections since its first democratic polls in 1993, with a series of military coups resolving past political crises.