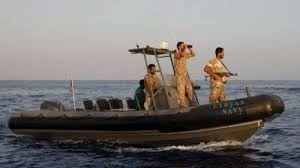 The internationally recognized government of Libya issued a new warning on Sunday that it will use “all means” necessary to protect its sovereignty after it claimed that three Italian warships trespassed its territorial waters on the night between Saturday and Sunday near the coast of Benghazi.

Italy refuted the claims and stated that its ships were in international waters.

Ships that have trespassed Libyan waters in the past have been targeted with warplanes by the Tobruk-based government. The alleged violation by the Italian warships was strongly condemned by the Tobruk government as it explained that “the warships kept on until they approached the shores of Deryana town in east of Benghazi.” There are reports that Libyan warplanes were scrambled to warn the warships.

The Italian defense ministry said the violation claims made by the internationally recognized government is “false” because “all of Italy’s military ships present in the Mediterranean operate in international waters and respect the limits established by treaty.”

Some countries of the European Union (EU) have their ships patrolling the Mediterranean Sea and calls by the European body for the Libyan government to approve navigation into their territorial waters to fight illegal migration and human smugglers were declined. Last month, several EU members sent their warships to international waters off the Libyan coast to combat the flow of migrants to the EU.

The Libyan government in Tobruk is unwilling to cooperate with the EU on the phenomenon as long as the country’s crisis is not over.

The UN is hoping that the peace process negotiations will lead to the formation of a unity government but reaching a political agreement between the two rival governments has been very challenging.