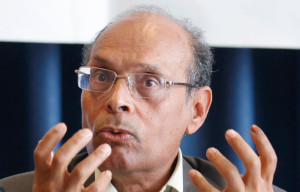 The former Tunisian President Dr. Mohammed Moncef Marzouki has been selected by the AU to lead an African Union electoral observation mission in Comoros.

The AU Observer Mission of forty short term observers are expected in the country on February 17 and will remain there until February 27.

Campaign has started ahead of the country’s presidential election to be held February 21. Twenty five candidates have been confirmed by the constitutional court.

Most of the hopefuls come from Grande Comorre which is next in line to hold the post according to a 2001 constitutional provision. Out of a population of 800,000 people, about 160,000 are eligible to vote.

As a reminder, Comoros gained independence from France in 1975 and has witnessed 20 coup attempts.

The country is one of the world’s largest producers of ylang ylang which is used in perfumes, but depends mostly on the diaspora remittances.