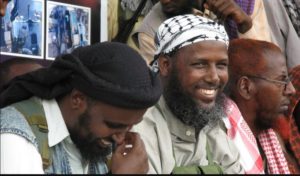 The former No. 2 leader of Somalia-based militant group al-Shabab Mukhtar Robow Abu Mansur has announced his candidacy for leadership of the southwest regional administration on Thursday, October 4.

The one-time candidate on the United States terror list wants to become president of the country’s South West regional state. He will contest against an incumbent, Sharif Hassan Sheikh Aden, and other aspirants in the elections next month.

“After receiving requests from the people of this region and their intellectuals, I have decided to run for the president of this state in the coming election,” Robow said at a rally.

Mukhtar Robow was removed from the terror list in June 2017 and with that, a $5 million bounty on his head was withdrawn. In August the same year, he defected to the government.

Robow is an elusive, charismatic militant leader who received training from al-Qaida in Afghanistan and was once a senior commander in al-Shabab. He reportedly has support from some regional MPs, a journalist with the Voice of America said.

Al Shabaab has been fighting for years to try to topple Somalia’s central government and rule the Horn of Africa country according to their own interpretation of sharia law. The militants, who are allied with al Qaeda, were driven out of the capital Mogadishu in 2011.

Posted by Khalid Al Mouahidi on October 5, 2018. Filed under News. You can follow any responses to this entry through the RSS 2.0. Both comments and pings are currently closed.