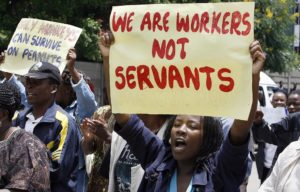 According to Mathabisi Bebhe, secretary general of the Zimbabwe Hospital Doctors Association, most junior doctors at the five major hospitals had downed tools to protest over pay, allowances and drug shortages.

The union is “really hopeful” that the government will intervene as early as possible, he said.

“The duration of the industrial action depends on when the government gives a proper practical solution,” he warned.

The government has previously said doctors should present their grievances while at work and has relied on military doctors to help at state hospitals during strikes.

In March, the doctors went on strike and won an increase in pay and allowances. However, doctors were still struggling to survive, Bebhe said.

The doctors, who earn a basic monthly salary of about $385, allowances not included, are also pressing the government to raise on-call allowances by 25 percent to $10 an hour paid in cash.

Finance Minister Mthuli Ncube, a University of Cambridge-trained economist who was appointed in September, has been trying to find ways to raise income for the southern African nation.

Posted by Khalid Al Mouahidi on December 4, 2018. Filed under Zoom. You can follow any responses to this entry through the RSS 2.0. Both comments and pings are currently closed.