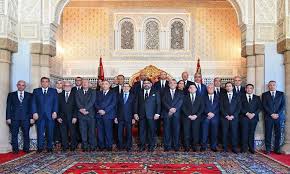 King Mohammed VI received Wednesday afternoon at the Royal Palace in Rabat, the members of the new constricted cabinet, led by Head of the Government Saad Eddine El Othmani.

As expected, the number of portfolios has been reduced from 39 to 24, resulting in the reduction of portfolios held by the five political parties forming the coalition government.

Saad Eddine El Othmani’s Party for Justice and Development thus holds 7 positions (12 in the previous cabinet), the National rally of independents (RNI) of Aziz Akhennouch 4 (instead of 7 previously), the Popular Movement (MP) of Mohand laensar 2 (instead of 5) while each of the USFP and the Constitutional Union (UC) got 1 portfolio each, instead of 3 and 2 respectively. The remaining 8 ministerial departments are entrusted to people without any political obedience.

Among the new comers there is Khalid Ait Taleb from the PJD who was entrused the Health portfolio, in replacement of Anas Doukkali, whose party, the PPS, quitted the governmental coalition last week.

Member of the Political Bureau of the Constitutional Union Hassan Abyaba is named Minister of Culture, Youth and Sports, and spokesperson for the Government. He replaces Mohamed Laâraj (MP), Talbi Alami (RNI) and Mustapha khalfi (PJD).

President of the youth association of the PJD, attorney Mohamed Amkraz is now Minister of Employment and Social Inclusion. He replaces Mohamed Yatim, another PJD member.

Those who were maintained in the Othmani II cabinet include
Mustapha Ramid (PJD) as Minister of State for Human Rights who also inherits the Ministry of Relations with Parliament and Civil Society; Aziz Akhannouch (RNI) as Minister of Agriculture, Maritime Fisheries, Rural Development, Water and Forests; Moulay Hafid Elalamy (RNI) as Minister of Industry, Trade, Green and Digital Economy; and Saïd Amzazi (MP) as Minister of National Education.

Mohamed Benchaaboun (RNI) remains at the head of the Department of Economy and Finance plus the department of the reform of the administration. Similarly, Aziz Rebbah and Abdelkader Amara, both from the PJD, keep respectively the Energy and Mines portfolio and that of Equipment, Transport, Logistics and Water.

Some members of the previous cabinet were tasked with new ministerial departments. This is the case of Mohamed Benabdelkader (USFP) who quits the Ministry of Reform Administration and Civil Service to become Minister of Justice.

The reshuffle took place in implementation of the royal guidelines as set out in the State of the Nation Address last July 2, when King Mohammed VI had called on the Head of Government to revitalize Morocco’s political elite and renew public services executives. The King made it clear that candidates to high-level positions should be “chosen on merit and competence.”

The monarch who had criticized some senior officials of the Moroccan administration, including cabinet members, governors, and local elected representatives for their failure to follow up the implementation of several social and economic development projects, urged El Othmani to consider people with high aptitudes in order to contribute to the country’s social development.

Posted by Hafid El Fassy on October 9, 2019. Filed under Columns, News, Zoom. You can follow any responses to this entry through the RSS 2.0. Both comments and pings are currently closed.