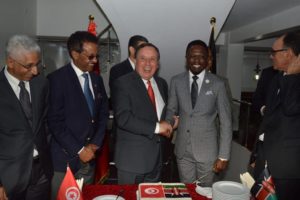 Tunisia has opened an embassy in Nairobi as the North African country seeks to boost its ties with Kenya.

Foreign Minister Khemaies Jhinaoui on a visit in Nairobi unveiled the diplomatic mission Tuesday, alongside his Kenyan counterpart Ababu Namwamba.

The two countries established their diplomatic relations in 1963. Namwamba welcomed the inauguration of the mission, noting that this would boost relations and cooperation between the two countries.

Jhinaoui’s visit is the first by a senior Tunisian official to Kenya.

The Tunisian top diplomat indicated that the decision to have an embassy in Nairobi was the work of former and late President Caid Essebsi on the basis of the relations between the two countries and Kenya’s strategic position in Eastern Africa.