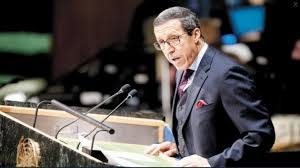 The United Nations Economic and Social Council (ECOSOC) re-elected Morocco’s Permanent Representative to the UN, ambassador Omar Hilale, for a second term as vice-president of ECOSOC and chairman of its humanitarian segment for 2020.

This renewal of trust in Ambassador Hilale is reflective of the credibility that Morocco enjoys within the UN and notably among the African group.

This re-election also stands as a recognition of the leadership of Hilale in 2019 as vice president and the achievements posted by Morocco.

Hilale pledged to forge ahead with strengthening ECOSOC and its humanitarian segment as well as to consolidate its input in order to meet the needs of millions of people in crises around the world.

Posted by Hafid El Fassy on October 17, 2019. Filed under News, Zoom. You can follow any responses to this entry through the RSS 2.0. Both comments and pings are currently closed.