Remarkable absence of Salah Mohamed amidst Pharaohs against Kenya and Comoros 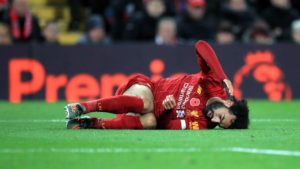 Mohamed Salah will miss two Africa Cup of Nations qualifiers. The information was revealed by Egypt’s soccer federation on Tuesday, Nov. 12. The Liverpool forward has an ankle injury and cannot play with Egyptian team for games against Kenya on November 14 and Comoros on November 18.

The federation’s statement indicates Egypt Coach Hossam El-Badry met with Salah, who stressed his commitment to play for the Pharaohs, but due to the injury, couldn’t make it.

According to Lesoir.be reporter, Salah watched his teammates train near Alexandria on Tuesday and the federation tweeted a photo of the striker wearing a protective boot on his left foot.

The 27-year-old player has suffered from a nagging ankle injury last month. He started playing just on Sunday and scored in Premier League leaders Liverpool’s 3-1 win over defending champions Manchester City. However, the ankle continues to pain him and he needs more time off to recover.

It is important to notice that Egypt is in Group G for qualifiers, which also includes Togo.

Posted by Emmanuel Agbenonwossi on November 13, 2019. Filed under News, Zoom. You can follow any responses to this entry through the RSS 2.0. Both comments and pings are currently closed.