Dozens killed as plane crashes into homes in DR Congo 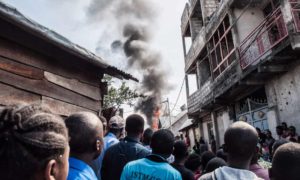 In Democratic Republic of Congo, a plane crash has killed at least 27 people, including some on the ground on Sunday, a rescue official said.

The small plane, which was operated by local company Busy Bee, crashed shortly after take-off en route to the city of Beni, about 250 km to the north, officials said.

The company said the 19-seater Dornier 228-200 had 16 passengers and two crew members on board.

Earlier, the National Border Health Program had said there were two survivors, including a crewmember, who were being cared for at a local hospital.

This airline company organizes scheduled flights in the northeastern part of the country, especially the city of Beni, Butembo and its peripherals.

Air accidents are relatively frequent in DR Congo amid lax safety standards and poor maintenance, and all the country’s commercial carriers are banned from operating in the European Union.

Last month, a cargo plane departing from the same airport and carrying staff members of President Felix Tshisekedi crashed an hour after take-off, killing all eight people onboard.

Posted by Emmanuel Agbenonwossi on November 25, 2019. Filed under News, Zoom. You can follow any responses to this entry through the RSS 2.0. Both comments and pings are currently closed.