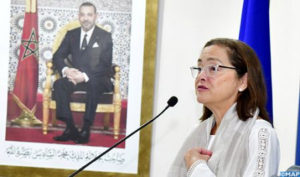 “The autonomy project is the unique solution,” said Juana Alexandra Hill Tinoco, Salvador’s Minister of External Relations during a meeting with her Moroccan counterpart Nasser Bourita.

The diplomat also confirmed that her country has withdrawn its recognition of the pseudo Sahrawi Republic, SADR, self-proclaimed by the separatist polisario front, operating from the Tindouf camps located in Southwestern Algeria.
Rabat has propose political solution including autonomy plan for the disputed territory.

The plan has received the support for the UN and most world powers, which view it as a serious and credible proposal for a final settlement of the regional crisis.

Salvador President Nayib Bukele this year, in June, announced that his country was retrieving its support for the SADR.

“For ideological reasons, Salvador had recognized a non-existent virtual republic that has neither a territory nor a population,” Bukele indicated back then.

Salvador is also mulling plans to open an embassy in the Moroccan capital.

During Tinoco’s visit in Rabat, Morocco and Salvador expressed their shared commitment to boost bilateral cooperation in the areas of renewable energy, agriculture, tourism, health and water, part of efforts to bolster south-south cooperation.

In the Joint Statement issued at the end of Tinoco’s working visit to Morocco, Salvador hailed the efforts made by King Mohammed VI to guarantee the stability and security of the region, and the role he plays in favor of inter-faith dialogue.

Salvador lauds “the important role of HM King Mohammed VI, Commander of the Faithful, notably efforts to promote inter-religious dialogue, tolerance and the values of peace,” said the statement. The visit to Morocco on March 30-31, 2019 by Pope Francis and the various messages of peace conveyed during this visit “are another proof of the spirit of openness and tolerance of Morocco,” the joint statement noted.

Posted by Hafid El Fassy on December 20, 2019. Filed under News, Zoom. You can follow any responses to this entry through the RSS 2.0. Both comments and pings are currently closed.