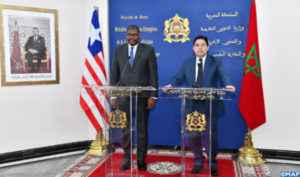 Liberia announced that it will strengthen its diplomatic presence in Morocco with the opening of a consulate in the southern city of Dakhla.

In addition to the embassy in Rabat and a consulate in Casablanca “we intend to upgrade our relations with Morocco and extend our services to new regions of the Kingdom,” Liberian Foreign minister, Gbehzohngar Findley, said Friday in Rabat, following talks with his Moroccan peer, Nasser Bourita.

The decision will further develop the long-standing bilateral relations between Liberia and Morocco, the Liberian top-diplomat added.

“As of next week, all the formalities will be completed and I will return for the opening of the consulate,” he said.

For his part, Bourita expressed Morocco’s thanks to Liberia for its clear and unwavering support for the Moroccanness of the Sahara at the level of regional and international organizations.

“Liberia has always been a reliable support for Morocco in all its diplomatic battles aimed at preserving its territorial integrity,” Bourita pointed out.

Djibouti and Burundi were the latest African countries that opened consular services, respectively in Dakhla and Laayoune, on the footsteps of Côte d’Ivoire, the Comoros, Gabon, Central African Republic, Sao Tome and Principe, which opened consular missions in Laayoune, in addition to Gambia and Guinea which chose to open a consulate in Dakhla.

Posted by Hafid El Fassy on March 6, 2020. Filed under Columns, News, Zoom. You can follow any responses to this entry through the RSS 2.0. Both comments and pings are currently closed.