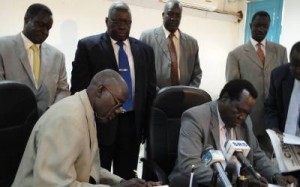 A year ago, all the State governors of South Sudan and the Ministry of finance joined forces to lay down a plan of action on how to collect taxes in this newly founded country.
The republic of South Sudan ministry of finance and economic planning was chosen as manager of this project. So a centralized method was put in place in order to eliminate multiple check points and diminish unofficial tax collections. However, last week, Central Equatoria Governor manifested its dissatisfaction in the system put in place on the grounds that their revenue was almost cut in half. Before the implementation of the tax collection system, Central Equatoria State collected 11 million SSP. Where as in the revised system it only receives 6 million SPP from central and an additional 2.6 million SSP in taxation revenues from land registration and vehicle registration. That is why both parties saw the necessity to clear things up by meeting to discuss on ways to improve taxes. According to the press release that was given today, they evoked ways to ameliorate tax collection in Central Equatoria State. However, the ministry of Finance and Economic planning still maintains that a centralized system is the best way to reduce costs for citizens that are purchasing goods and to allow transparency of tax collection. Even so, the ministry acknowledges that some technical difficulties have occurred during the process. By the end of the meeting a technical committee was established to allow the fluidification of the tax collecting method.
A report is due by the 13th of November with recommendations to solve mainly CES’s concerns. Until then CES has agreed to delay plans of implementing a new system of tax collection that will put an end to the centralization.