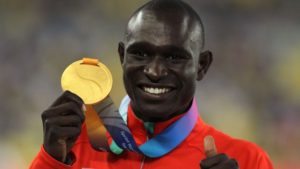 His victory was a successful defense of his Olympic 800m title, which he won in London four years ago. The runner nicknamed “King David” became the first person to successfully defend an Olympic 800m gold medal since 1964.

Rudisha, also the world champion and world record holder, clocked a season’s best of 1min 42.15sec to become the first man in 52 years to defend the 800m title.

President Uhuru Kenyatta congratulated the runner on twitter saying “We (Kenyans) are so very proud of him for retaining his 800 metres gold.”

By his feat, Rudisha joins Jemima Sumgong who also won gold in the Olympics marathon. The first Kenyan woman to do so.

Sumgong produced a scintillating performance and made history by becoming the first Kenyan woman to win an Olympic gold medal in the 42 kilometre race, in a time of 2 hours 24 minutes 04 seconds.