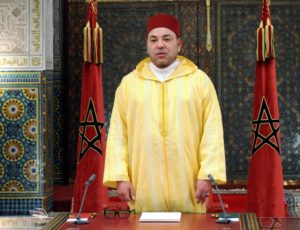 King Mohammed VI of Morocco underlined Saturday the multi-dimensional relationship binding Morocco to Africa, which holds a special place in Moroccans’ hearts, and which is a top priority in Morocco’s foreign policy.
“For Morocco, Africa means more than just being part of a geographical area, or having historical bonds with the continent,” King Mohammed VI said in a speech he delivered Saturday on the occasion of the 63rd anniversary of the Revolution of the King and the People.

This revolution, which is taking place on the eve of Youth Day, marking this year the Sovereign’s 53rd birthday, embodies the Moroccan people’s strong attachment to their King and to the independence and territorial integrity of their country. The commemoration of this event also brings back to mind the help and support extended by Morocco to other Maghreb and African countries that were under the yoke of colonialism.

In this vein, the King pointed out that “That historical era was characterized by coordination and solidarity between the leaders of the Moroccan resistance movement and the Algerian Liberation Front,” and that “the Moroccan resistance movement provided moral and material support to the Algerian revolution which, at the time, was facing a fierce campaign by colonial forces seeking to quash it before it celebrated its first anniversary.”
“That uprising and that solidarity breathed new life into the Algerian revolution, and the two countries also played a major role in the liberation and independence of Africa,” the Sovereign said.

King Mohammed VI expressed hope that “the commitment and sincere solidarity which have always bound the Algerian and Moroccan peoples will be rekindled so that we may continue to work together, honestly and in good faith, to serve Arab and Maghreb causes and rise to challenges in Africa.”
Touching on the problems plaguing African peoples today, such as backwardness, poverty, migration, wars and conflicts, in addition to despair and succumbing to extremist and terrorist groups, the Sovereign said this is but the result of the disastrous policy adopted for decades by colonial powers.

Colonial powers “looted Africa’s resources, stifled the potential of its sons and daughters, mortgaged their future, impeded the continent’s development and sowed the seeds of discord and strife among African countries,” he deplored.

Yet, despite the extensive damage caused by colonialism, the King said he is confident that “Africa has the means to ensure its development and to take its destiny into its own hands, thanks to the resolve of African peoples and to the continent’s human and natural resources.”

The Sovereign who referred to Morocco’s recent decision to reintegrate the African union pointed out that the decision that “Morocco should take its natural place, once again, within the African institutional family clearly illustrates our commitment to continue supporting the causes of African peoples.”

After he pointed out that Morocco and Africa have a shared destiny, he said he believes that “there can be no progress without stability: either the two go together, or they do not exist.”
And Morocco, under the leadership of King Mohammed VI, spares no effort to promote African countries’ stability and development.
“Morocco always gives to the peoples of its continent; it does not expect to take from them. Its commitment to African issues and concerns was never made with the intention of exploiting the continent’s assets and natural resources – unlike neocolonialist practices,” the King said, adding that Morocco always makes sure that its cooperation with African countries is mutually profitable.

“Morocco does not view Africa as a market for the sale and promotion of Moroccan products, or as a continent for making quick profit. We see Africa as a forum for joint action, for promoting development in the region, and for serving African citizens.

“In this respect, Morocco contributes, along with other African countries, to the implementation of human development projects and the provision of social services which have a direct bearing on the lives of people in the region.”

As an illustration of this human development-oriented cooperation, the King said “Morocco does not merely export medicines to Africa; it also makes sure to set up pharmaceutical companies and healthcare centers.
It develops infrastructure, builds vocational and technical training centers and implements projects that offer steady jobs and income – such as fishermen’s villages.”
All these projects support smallholders and encourage the preservation of ecosystems, he said, recalling in this vein the project for the protection and development of Cocody Bay, in Abidjan, within the framework of a unique model of cooperation between the relevant public institutions in Morocco and Cote d’Ivoire, with the effective involvement of private sector operators from both countries.

“For us, Africa is not about goals and objectives; dealing with Africa involves a commitment towards the African citizen, wherever he or she may be,” he went on to say, underlining that “Morocco’s national responses to many complex regional and international issues – such as development, migration and the fight against terrorism – are in line with a firm commitment to serve African peoples.”

“That should not come as a surprise since Morocco has always been at the forefront of advocates calling for the liberation of our continent. In this regard, I am following in the footsteps of my pioneering ancestors who believed in Africa, and who worked earnestly for the unity, openness and progress of its peoples,” the King stated further.