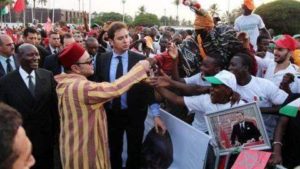 Morocco has adopted a genuine solidarity-based policy regarding sub-Saharan migrants, designed to make sure migrants’ rights and dignity are safeguarded.
The statement came in the speech that King Mohammed VI delivered on Saturday on the occasion of the 63rd anniversary of the Revolution of the King and the People.

“We attach as much importance to improving the livelihood of Africans in their countries as we do to African migrants in Morocco,” the Sovereign said, adding that as a result of this policy, the migrants in Morocco “do not suffer the same hardships endured in many parts of the world.”
Over time Morocco has evolved from one of the world’s leading emigration countries in the second half of the twentieth century, when Moroccans were forming one of the largest and most dispersed non-Western migrant communities in Western Europe, to a country of transit for migrants seeking to reach Europe. Over the past few years, an increasing number of migrants who fail to enter Europe prefer to settle in Morocco on a more long-term basis rather than return to their more unstable and substantially poorer home countries, as explained by the Migration Policy Institute.

In view of the increasing number of migrants, mainly from sub-Saharan countries, who chose to settle in Morocco, authorities adopted a new migration policy in 2014 that enabled to regularize the situation of more than 30,000 African migrants.

As stated by King Mohammed VI in his speech, “Morocco was one of the first countries of the South to adopt a genuine solidarity-based policy regarding sub-Saharan migrants. This integrated policy, which is rooted in humanitarian values, is designed to make sure migrants’ rights and dignity are safeguarded.

“As part of the implementation of this policy, my country has, without any arrogance, pomposity or discrimination, regularized the situation of migrants using fair and reasonable standards. It has provided the conditions needed for migrants to reside, work and lead a dignified life within our community,” the Sovereign said, adding that despite the few difficulties the African migrants face in Morocco, these difficulties have nothing to do with the color of their skin, their nationality or their status as migrants. “They enjoy the same rights,” he insisted.
“This humanitarian policy has earned Morocco the honor of co-chairing, alongside Germany, the Global Forum on Migration and Development for 2017-2018,” the King said.

He stated further that “Morocco, which has long rejected the methods adopted by some to address migration issues and which have turned out to be a failure, is proud of what it is doing in terms of receiving and integrating migrants. He pledged that Morocco “will keep up this practical, humanitarian approach.”

“As for those who criticize Morocco, or dare to disparage my country, they have yet to provide migrants with something – if only a fraction of what we have offered,” he said, before he deplored what he called “a distorted approach to migration issues” adopted in the Mediterranean, which resulted in having “no real policy to integrate migrants.”

The entire world is talking about migration and the tragedies migrants have to endure. The situation is further compounded by the spread of the phenomenon of extremism and terrorism, and by attempts to link it – rightly or wrongly – to migrants, especially in Europe, King Mohammed VI stated further.

In his speech, the Sovereign also addressed the Moroccans settled abroad, calling them “to remain firmly committed to their religious values and to their time-honored traditions as they face up to this phenomenon of extremism and terrorism which has nothing to do with their culture or background.
He urged them “to maintain their good reputation, to show forbearance in these trying circumstances, to close ranks and to be, as always, staunch advocates of peace, concord and co-existence in their country of residence.”
“Those who engage in terrorism, in the name of Islam, are not Muslims. Their only link to Islam is the pretexts they use to justify their crimes and their folly.
He warned that terrorists take advantage of some young Muslims – particularly in Europe – and of their ignorance of the Arabic language and of true Islam, to spread their distorted messages and misleading promises.
“Terrorists and extremists use all means to convince young people to join them in order to attack societies profoundly committed to the ideals of freedom, openness and tolerance,” he said adding that “as ignorance spreads in the name of religion, Muslims, Christians and Jews have to close ranks in order to tackle all forms of extremism, hatred and reclusiveness.”