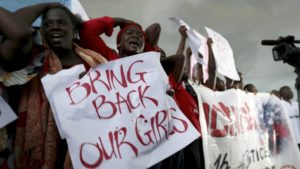 Twenty one Chibok girls have been released on Thursday by the insurgent group Boko Haram, the presidency said.

According to president Buhari’s official spokesperson, Mallam Garba Shehu, the release of the girls was the result of negotiations between the government and Boko Haram.

The talks were facilitated by the International Red Cross and the Swiss government, he said on his twitter handle.

According to Sahara Reporters portal, the 21 girls were picked up by a military helicopter in Borno state where the terrorist group dropped them off around 5:30 a.m. on Thursday.

Lai Mohammed, the minister of information and culture, said at a news conference in Abuja that the girls were flown to Kaduna, in the northwest of the country, and were to be taken to Abuja.

“Ahead of their arrival, we have assembled a team of medical doctors, psychologists, social workers, trauma experts, etc., to properly examine the girls, who have been in captivity for so long,” Mr. Mohammed said.

Boko Haram abducted over 200 girls from their school in Chibok situated in Borno State two years ago.

Activists have repeatedly marched to the presidency demanding action on the part of the government whenever Boko Haram released a video of the girls.

President Muhammadu Buhari recently called on the United Nations to join his government in negotiations with the group to secure the release of the school girls.