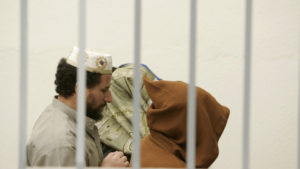 Ten people have been sentenced altogether to 32 years in prison for terrorism related acts, and apology for terrorist organizations by the court of Criminal Appeal of the city of Sale, reports say.

A total of 13 cases were tackled by the court on Thursday during a trial which lasted four hours, local media Al Akhbar reports.

Three defendants have been cleared and ordered free the media further reports.

Among the 10, the judge condemned a head of family, in his forties, to five years in prison for trying to join the Islamic State group (IS) in Syria. He was arrested in Turkey while on his way to Syria and deported to Morocco. He was charged in line with anti-terrorism law.

Another head of family and his son have been handed respectively five and one year jail sentences after being charged for threatening to kill an imam on social media. They have been also sentenced to pay a fine of more than 10,000 Dirhams.

The court also found them guilty of apology for terrorism, terrorism-related acts as well as of persuading and forcing someone to commit terror acts.

Three other people charged for apology for terrorism and for persuading and forcing someone to commit terror acts have been sentenced to four years in prison each. Another trio has been condemned to two years in prison for related charges. Two of them were fined 10,000 Dirhams.

The prosecutor requested application of condemnations spelled out by the penal code for the offence but the defense called for reduction of the sentences arguing that “the charges pressed against them have no legal basis”, Al Akhbar further says.

Morocco has seen a spike in the number of citizens falling prey to IS which has ticked the North African country on its target list. Around 500 local IS sympathizers are moving around in the kingdom. An estimate of 1,500 Moroccans are fighting for terrorist IS in hotbed conflict zones, according to experts.