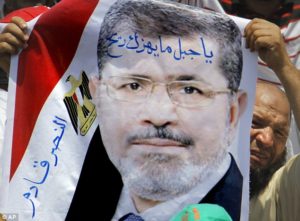 Egypt’s Court of Cassation on Tuesday annulled one of two life sentences handed down against the former president Mohamed Morsi and called for a retrial of the cases.
In its Tuesday ruling, the Court of Cassation also quashed the death sentences of five other leaders of Morsi’s now-banned Muslim Brotherhood group, including its leader Mohamed Badie, in the same case.
The court further struck down life sentences passed in the same case against 21 Muslim Brotherhood members.
Mohamed Morsi, Egypt’s first democratically-elected president was sentenced to death in June 2015 on charges of participating in prison breaks and violence against policemen during the 2011 uprising which toppled former dictator Hosni Mubarak.
While the new ruling spares him from the threat of execution, Morsi is serving three lengthy jail sentences totalling 60 years in addition to a life sentence.
Note that Mohamed Morsi has been sentenced in four trials in the last three years.
The Court of Cassation will later this month begin reviewing a second life sentence against Morsi in a separate trial on charges of stealing documents relating to national security and handing them over to Qatar, a longstanding supporter of the Brotherhood.
US-based non-governmental organization Freedom House has described Egypt’s courts a “tool of repression rather than a pillar of justice.”