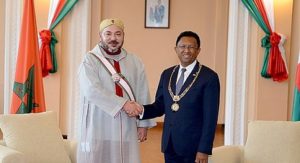 Relations between Morocco and Madagascar are poised to have a bright future as the two countries’ public institutions and private economic operators seem determined to enhance their cooperation and partnership.

This determination was translated Monday by the signing of twenty-two agreements covering a large array of sectors at a ceremony in Antananarivo, co-chaired by King Mohammed VI and President Hary Rajaonarimampianina.

The agreements, which fall in line with the Moroccan King’s African strategy and his vision of South-South cooperation, aim at strengthening the legislative framework governing bilateral cooperation, primarily in matters of agriculture, finance, culture, employment, renewable energies, vocational training, and river preservation.

Actually, one of the Memorandums of Understanding signed on Monday provides for the development and preservation of the Canal des Pangalanes and nearby areas.

The 700-Km long Canal des Pangalanes, which is four times longer than the Suez Canal, consists in a series of natural rivers, waterways and man-made lakes.

The development and preservation project will be carried out in partnership with the Moroccan Marshica Med Ltd, which has developed over the years a recognized expertise in the fields of large-scale environment-friendly territorial projects. Marshica Med Ltd, which developed the Marshica Lagoon, has set up the necessary technical and institutional tools to manage this site on a long term basis. The Marshica Lagoon development plan encompasses urban management, transportation, liquid purification and water. Marshica Med Ltd is currently sharing its expertise with the Ivorians to develop the Cocody Bay project.

Funding the Canal des Pangalanes project was made possible thanks to the role played by King Mohammed VI who convinced Arab funds to extend financial assistance to Madagascar. The funds were channelled through Morocco’s Attijariwafa Bank.

Before the agreements signing ceremony, King Mohammed VI had a tête-à-tête meeting with President Rajaonarimampianina who decorated the Monarch with Madagascar’s highest honorary distinction, in recognition for his efforts to enhance inter-African cooperation for the sake of African peoples. King Mohammed VI on his part decorated the Malagasy President with Al Wissam Al Mohammadi, the Kingdom’s highest distinction.

The Malagasy head of state told the media that the Moroccan King’s visit to Madagascar bears “a strong symbolic meaning,” and would undoubtedly reinforce friendship relations between the two countries.

After he highlighted Morocco’s special ties with Madagascar, notably the city of Antsirabe, where the late King Mohammed V and the royal family had settled after their forced exile in 1954, President Rajaonarimampianina underlined that the talks he had with King Mohammed VI and the agreements signed “herald a fruitful future” for bilateral cooperation.

The Moroccan Sovereign arrived on Saturday in Antananarivo for an official visit to Madagascar, 2nd leg of a new African tour that led him to Ethiopia and will take him to other African countries. The previous tour had taken the Sovereign to Rwanda and Zambia.