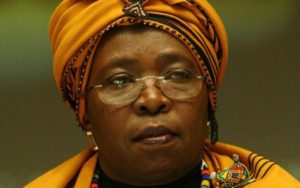 Morocco’s foreign ministry on Wednesday accused the African Union (AU) commission chairperson, Dr Nkosazana Dlamini-Zuma of frustrating its attempt at readmission.
According to the North African nation’s foreign ministry, Dlamini-Zuma had delayed the distribution of the Moroccan request to AU members without any apparent reason, and then invented a new procedural requirement to reject letters from AU members supporting Morocco’s demand.
“The kingdom of Morocco denounces vigorously the manoeuvres of African Union commission head, who is trying to thwart Morocco’s decision to regain its natural and legitimate place in the pan-African institutional family,” the foreign ministry said in a statement.
“The president of the AU commission is dropping her neutrality and failing the rules and standards of the organization and its members’ will,” the statement added.
As a reminder, Morocco quit the AU in 1975 after disagreements over Western Sahara, which the AU recognizes as an independent state.
Rabat expressed the desire to rejoin the organisation, 32 years after it left and officially presented a request in September to retake membership of the body.
King Mohammed VI has been touring Africa in the last three months seeking support for its AU demand and autonomy proposal for Western Sahara.