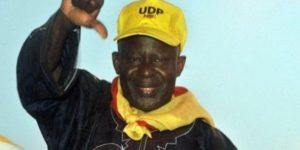 Ousainou Darboe, leader of the United Democratic Party (UDP) has been released on bail along with 18 other detainees few days after President Jammeh conceded defeated in December 1 elections.
Darboe and the other men were arrested in April for taking part in a demonstration over the alleged death of activist in custody, reports say.
Darboe is main opposition leader and was expected to contest the Thursday elections with Yahya Jammeh before being thrown in prison.
Banjul court of the appeal declared the 19 men free but on bail. Reports say it is less likely that they return to prison as elect-President Adama Barrow vowed to free all political prisoners.
Supporters of the UDP marshalled around and in the court to welcome the decision.
“It’s a new Gambia,” Darboe said as he came out of the court.
“I congratulate President Jammeh for accepting defeat. That is acting with maturity. I have respect for him. I would never address him as a crazy man and I never would address him as an evil man.”
The court decision was also welcomed by human rights organisations. Sabrina Mahtani, Amnesty’s West Africa Researcher hailed the men’s release while also reminding the situation of other prisoners who according her have been arrested for opposing the one who ruled the country for 22 years.
“The release of the [18 other peaceful protestors] on bail is a big moment for them and their families,” she said.
“We hope that this positive step indicates that they will be fully acquitted in due course.”
“We need to remember that there are still many more people still in prison for voicing their opinions or being perceived as opponents to the regime and there are people who have disappeared who we still don’t know anything about.”
Darboe’s release is the second victory for opposition just days Jammeh accepted vote results announcing him defeated. He acknowledged his defeated in a televised address and congratulated Barrow for his win.
UDP is the largest party in the coalition which chose Barrow. Darboe is expected to occupy a top position in Barrow’s team when he takes office in January.