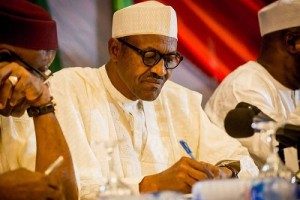 Nigeria’s President Muhammadu Buhari on Wednesday presented a record $24 billion budget for 2017 as oil prices soared to $57.83 on Monday, December 12 leaving the price of the commodity at $15/barrel over the $42.5/barrel that the president is proposing for 2017.

The Senate had earlier complained that the president’s projection was unrealistic, but this increase in price has shown that it might not be so.

According to Buhari, the budget, which marked an increase of 20.4 percent on last year’s spending plan, seeks to boost spending to revive the economy.

The new budget is aimed at pulling Africa’s biggest economy out of its first recession in 25 years.

The recession was largely caused by low global oil prices, as crude sales account for two-thirds of the government’s revenue.

The allocation for the Presidential Amnesty Program was also increased to N65 billion.

The president also said he wants to restore oil output to 2.2 million barrels per day following a series of attacks since January on energy facilities in the southern Niger Delta that deepened the recession by hitting the economic mainstay.

The budget needs to be endorsed by parliament before being sent back to the president to be passed into law. The process could take months.