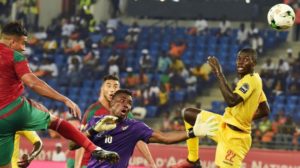 The Moroccan national football team Friday escaped debacle as it outclassed Togo in the second match of the group, a crucial stage to harness hope for potential qualification for knock-out stage.

The score from Dossevi’s boot was sending Morocco clearly out of the competition.

The 11-men led by Herve Renard quickly took stock of the situation to square up to the Togolese team. Two headers first from Aziz Bouhaddouz and from Romain Saiss set the Atlas Lions on a way out of national disappointment. They took the lead, controlling the game with a good team play.

The former Gunners striker, Adeyabor sought to break the Moroccan defense but the Moroccan side bolstered the defense with Juventus right back and captain Benatia ruining all attempts by the Togolese team.

Morocco finished the job during the second half after substitute Youssef En-Nesyri took a short from distance to seal Morocco’s lead. Togolese veteran goal keeper Agassa failed to stop the ball running low. The goal set Moroccan side on a winning course.

Thanks to the win, the North African team emerged from the bottom to occupy the second spot in the group right behind Congo and in front of reigning champions Côte d’Ivoire still struggling to clinch their first win.

Morocco now can decide on their faith. A win or a draw with Côte d’Ivoire Tuesday against a draw between Togo and Congo sends the Moroccan side to the knock-out stage of the African Cup of Nations.