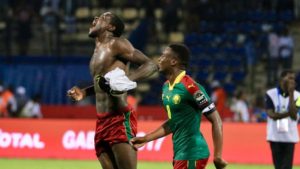 Late second-half goals from Michael Ngadeu-Ngadjui and Christian Bassogog secured Cameroon’s passage to the 2017 Africa Cup of Nations final as they beat Ghana 2-0 on Thursday to set up a showdown with Egypt on Sunday.

Ghana grew into the match as the half wore on, though, and they regained a measure of control in midfield as they slowed the tempo. Both sides had gone close to breaking the deadlock before Michael Ngadeu-Ngadjui took advantage of atrocious defending from a free-kick to lash in the opener in the 72nd minute.

With seconds remaining Christian Bassogog sealed victory when he applied a deft finish to a counter-attack.

According to Ghana’s Coach, Avram Grant, the absence of key players is the factor behind their defeat.

Indomitable Lions are into their first final since they lost to Egypt in 2008.

“It is a real dream for us to get to the final,” said the Belgian coach of Indomitable Lions.

In his words, “Ghana has more experience than us – look at what they have done in recent tournaments. But since the start of this tournament we have shown we keep going right to the end in every game.

“I am very happy, especially for the team. They are an exemplary group on and off the field and they deserve to be in the final,” he concluded.