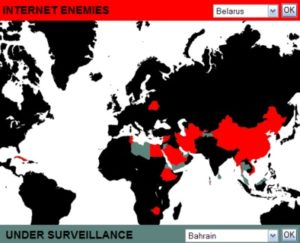 In Cameroon, businesses are losing money as a result of an internet cut that has been ongoing since January 17, 2017. Schools as well as public services in the English-speaking region of the country remain closed, local media reported.

According to a report published by Internet Sans Frontières (Internet without Borders), small businesses lost an estimated 44,000,000 CFA Francs, which translates to $723,000 or €675,000.

IWB calls for internet restoration to the affected areas as a matter of urgency.

The Right group also alleged that even though the government issued no official statement on the matter, they had information that service providers were ordered to truncate access because of alleged threats to national security.

Violent protests and arrests have occurred for months, as Anglophone activists have pressed for reforms in the French-speaking nation. What began as protests evolved into boycotts and doctors and health professionals joined the strike.

Over 100 people were arrested and one person killed in November last year in the northwestern town of Bamenda.

The situation has become more intractable following the arrest and subsequent transfer of the leaders of the Cameroon Anglophone Civil Society Consortium from Buea to Yaounde last week.

The West Cameroon diaspora has been called upon to provide proxy servers to the freedom fighters back home.