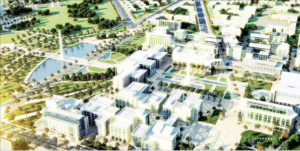 President Salva Kiir Mayardit of South Sudan thanked King Mohammed VI for his visit to Africa’s newest nation, saying such a visit shows Morocco’s strong willingness to support the stability and peace-building process in his country facing many challenges.

In a joint statement issued at the end of the official visit paid by King Mohammed VI to South Sudan Feb. 1-2, President Salva Kiir says the issue of Sahara is different in its genesis, legal and political background from that of South Sudan.

He also backs UN efforts engaged to reach a political solution to the regional dispute over the Sahara and lauds as “serious and credible” the efforts made by Morocco in this regard.

President of South Sudan congratulated King Mohammed VI for the reintegration of Morocco within the African Union and hailed the support of the overwhelming majority of African countries to Morocco, says the joint statement.

He underlined Morocco’s role and effective contribution for the development, unity and stability of the continent, and praised the royal vision seeking to enhance inter-African cooperation, peace, stability and prosperity, adds the document.

For his part, King Mohammed VI paid tribute to the recent call made by President Salva Kiir for a national dialogue, describing it as a bold move for achieving African Union goal of silencing the gun by 2020 and creating a stable, developed and prosperous South Sudan.

During their talks, the leaders of the two countries expressed commitment to foster bilateral relations and build a “win-win” South-South cooperation and triangular partnership.

The joint statement says the two countries leaders were pleased to witness the signing of the agreement related to the construction of the new capital city of Ramciel.

In a presentation made before the two Heads of State, Moroccan Interior Minister Mohamed Hassad expressed the North African Kingdom’s readiness and commitment to help South Sudan build a new capital city.

Before the Sovereign’s visit, South Sudan voiced desire to benefit from Morocco’s assistance and expertise to build its new administrative capital.

The project will cost nearly $10 billion and Morocco has agreed to pay $5.1 million for the technical and financial feasibility studies of this large-scale project.

King Mohammed VI has informed President Salva Kiir about Morocco’s readiness to share its experience with South Sudan in the areas of security, economic and social development with a view of contributing to the new nation’s stability and development.

During this visit, the Moroccan Monarch and President of South Sudan co-chaired the inauguration and the launching ceremonies of several development projects undertaken in South Sudan by Morocco.

In this regard, the two Heads of State officially opened the field hospital installed in Juba by the Royal Armed Forces to provide medical services to the population.

The two Heads of State also visited the storage sites for humanitarian assistance donated by Morocco. On this occasion, King Mohammed VI handed over items to a number of internally displaced persons.