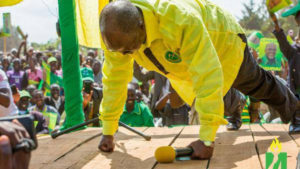 The Tanzanian ruling party has sacked 12 senior officials, demoted six members and warned four others over a sabotage scandal in the East African nation.

The disciplinary action comes as a big shake up of the Chama Cha Mapinduzi (CCM) party chaired by Tanzania’s President John Magufuli.

The party’s publicity secretary, Humphrey Polepole indicated that the penalties meted out by the NEC (National Executive Committee) “are final and there is no room for appeal.”

“Those who are on their way to attend the Special General Congress will not be allowed to participate although they will be given all the upkeep costs,” he added.

President John Magufuli has called on members to accept changes including the removal of regional secretaries as part of measures to reduce committee members.

In his words, “We should think of our party’s interests … There is no cause for alarm. The proposed changes are a normal thing to giant institutions like ours.”

Magufuli said the changes were also aimed at bringing people closer to the party, adding that CCM was formed as the party for the oppressed.

“We should return to our roots and basics. This party is for the poor and the oppressed,” he said.

Magufuli, a former chemistry teacher who served as works minister in the previous administration, became the country’s fifth president two years ago.