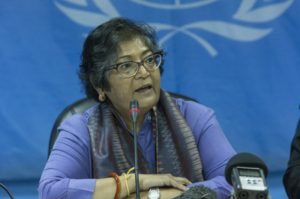 Chair of the Commission on Human Rights in South Sudan, Yasmin Sooka, has vehemently decried the “massive” increase in gross human rights violations, as well as an escalation in fighting in South Sudan, where, she deplored, “impunity is the norm”.

Yasmin Sooka made the statement while she was presenting her report to the UN Human Rights Council in Geneva on Tuesday.

The UNHRC had mandated a three-member panel to draft a report on the situation in South Sudan, one year ago. Besides Yasmin Sooka, the panel includes Commissioners, Godfrey Musilla and Ken Scott.

Sooka warned that the situation in South Sudan continued to deteriorate over the past nine months as unlawful arrests and detentions, torture, rape and killing “have become the norm,” including in places that had once been relatively peaceful.

The report, she said, makes it clear that South Sudanese civilians have been deliberately and systematically targeted on the basis of their ethnicity by Government and government-aligned forces, for killing, abduction, unlawful detention, deprivation of liberty, rape and sexual violence, the burning of their villages, and looting.

“On the ground, this translates into bound corpses left on roadsides, hunger where once there was plenty, and thousands of children ripped from their mothers – some forced to carry guns and kill – yet another lost generation,” stated Yasmin Sooka, stressing that citizens are treated like enemy combatants because of their perceived political allegiance to the other side, calculated by ethnicity. Opposition forces too have been responsible for human rights abuses although to a lesser extent, she added.

She called the international community to be bold enough to push for the establishment of a court to try the authors of the atrocities.

“The alternative is policy of appeasement – making us complicit in the bloodshed that is happening,” she said.