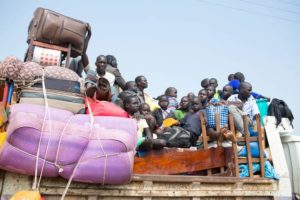 The UN refugee agency UNHCR on Wednesday said about 60,000 South Sudanese have crossed borders to neighboring Sudan in the first quarter of 2017 as famine spreads and fighting continues.

More than 365 000 South Sudanese refugees, most of them women and children have arrived in Sudan since the world youngest nation has been engulfed by war.

“The number of new arrivals has surpassed expectations, signaling a likely worsening situation in South Sudan,” UNHCR said in a statement.

The South Sudanese government last month declared famine in two regions of the East African country where more than 100,000 people are facing starvation.

The world’s youngest nation has been mired in civil war since 2013 after President Salva Kiir accused his rival and former deputy Riek Machar of plotting a coup against him.

Since then the fighting has increasingly split the country along ethnic lines, leading the UN to warn of a potential genocide and ethnic cleansing, with no prospect of peace in sight.

The country was already vulnerable to climate-related shocks to agriculture, but this crisis is largely man-made, UN said earlier this week.

The fighting has prevented many farmers from harvesting their crops while hyperinflation has put the price of imported food beyond the reach of many.