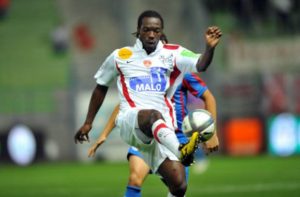 Moise Brou Apanga, a Gabonese footballer of Ivorian origin died on Wednesday during a training session in the Gabon capital city Libreville.

The 35-year-old collapsed during a training session with his Gabonese club FC 105 Libreville.  He succumbed to a heart attack, according to the Football Federation (Fegafoot).

“The country has lost a brave son who has always given his best for the Gabonese flag,” Fegafoot said in a Statement.

Members of the football fraternity have been paying tributes on the demise.

‘We played together, we played against each other! Anyway it was always a pleasure to be by your side. Rest in peace my brother, Moïse Brou Apanga,” Gabon’s skipper, Pierre-Emerick Aubameyang posted on Twitter.

His former coach, Alain Giresse, said “I made him get his naturalization when he was Ivorian, he played in the country and I then helped him to join Brest – (a lower division French side)” … “It is really terrible, it is not possible,” he added.

The French coach handed Brou Apanga his debut in 2007 and also helped him secure a move to Brest.