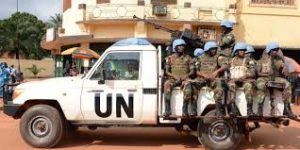 The United Nations human rights chief Tuesday expressed grave alarm over the spread of violence by armed groups against the civilian population in several parts of the Central African Republic in recent months, as well as attacks against UN peacekeepers in the country’s southeast.
“Violence and rising tensions are spreading to areas of the Central African Republic that had previously been spared the kinds of terrifying violence seen in some other parts of the country – this is highly worrying and should set off loud alarm bells,” said UN High Commissioner for Human Rights Zeid Ra’ad Al Hussein, in a news release from his Office (OHCHR).
“The hard-earned relative calm in Bangui and some of the bigger towns in CAR risks being eclipsed by the descent of some rural areas into increasing sectarian violence, with defenceless civilians – as usual – paying the highest price,” he added.
The latest in a series of attacks was an incident this weekend in Bangassou, in which armed men used heavy weapons to attack the base of the UN mission in CAR, known by its French acronym MINUSCA, killing an element of the Moroccan contingent. The armed men also attacked the Muslim neighbourhood of Tokoyo where numerous civilians were killed and others wounded.
Investigations by MINUSCA’s Human Rights Division suggest that between March and May 2017 more than 121 civilians and six peacekeepers were killed, excluding figures in the two latest incidents.
Mr. Zeid also noted the fact that the Special Criminal Court is preparing to start its work is a strong signal by the authorities and the international community that the continued climate of impunity is unacceptable. 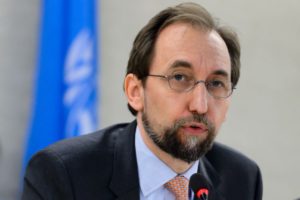 Meanwhile, the Security Council issued a statement to the press overnight, strongly condemning the violence by anti-Balaka elements in Bangassou on May 13 and 14 that targeted MINUSCA’s field office, civilian populations from particular communities, as well as humanitarian personnel.
The 15-member body reiterated that “attacks against peacekeepers may constitute war crimes and reminded all parties of their obligations under international humanitarian law.”
These attacks resulted in one Moroccan peacekeeper killed and one Moroccan peacekeeper injured, as well as civilian casualties and significant population displacement.
The members of the Security Council expressed their deepest condolences and sympathy to the family of the peacekeeper killed, and their deepest sympathy to the family of the peacekeeper injured, as well as to Morocco, and to MINUSCA.
The Council called on the CAR Government to swiftly investigate this attack and bring the perpetrators to justice.
The May 13 took place just hours after the UN held a memorial ceremony to honor five peacekeepers, four Cambodians and one Moroccan, killed on May 8 in a nearby village of Yogofongo.
The deadly attack was perpetrated by suspected anti-Balaka elements. Ten peacekeepers, 9 Moroccan and a Cambodian, were injured in this attack.
CAR is emerging from civil conflict, which began in 2013, with clashes between the mainly Muslim Séléka rebel coalition and anti-Balaka militia, which are mostly Christian.