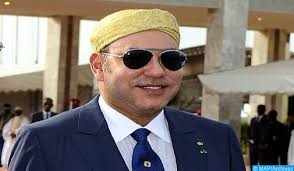 The International Organization of la Francophonie has awarded King Mohammed VI of Morocco its highest honorary order, the Order of La Pléiade, in tribute to his determining role in promoting the values of dialogue and tolerance worldwide and in establishing at home a modern state, a state of the rule of law.
The decoration was handed to the Monarch by President of the Parliamentary Assembly of La Francophonie, Aubin Minaku Ndjalandjoko, at an audience in the Royal Palace in Fez, the Royal Office said in a statement.
Ndjalandjoko was accompanied by a delegation of the Africa Regional Assembly of the Parliamentary Assembly of La Francophonie (APF), which held its session in Rabat on May 22-24.
The awarding of this honorary order of La Francophonie and dialogue of cultures translates appreciation of the Monarch’s actions at the national and international levels to enhance the civilizational heritage of humanity and recognizes his initiatives that have anchored and consolidated the vocation of Morocco as a land of coexistence and cultural diversity, the Royal Office statement said.
The APF President delivered an address during the audience wherein he hailed the King’s “humanistic initiatives” in the service of the ideals of cooperation and friendship between peoples in general and in the Francophonie region in particular.
Aubin Minaku Ndjalandjoko underscored the progress scored by Morocco at the economic and social levels and also at the level of the promotion of the rule of the law. He paid tribute to the King’s commitment towards Africa and to his laudable actions across the continent, saying that the large number of delegations, which took part in the Africa Regional Assembly, evidences recognition of this commitment.
In a statement to MAP following the audience, Ndjalandjoko, who is also the Speaker of the National Assembly of the Democratic Republic of Congo, insisted on the Monarch’s role in promoting South-South cooperation.
King Mohammed VI, who “brought Morocco back to the forefront in Africa, both at the level of the African Union and of the Parliamentary Assembly of La Francophonie… has laid bridges of a methodical and responsible South-South cooperation, the only way to allow Africa to occupy the place it deserves in the concert of nations,” he said.
He said he is confident, that Morocco, which is willing to share its know-how and expertise with other African countries, can play a leading role in getting Africa out of the quagmire, especially that the Kingdom now plays a clear and unequivocal part at the institutional level of the African Union.
Morocco’s role in the continent is appreciated by all African countries, which know they can and will benefit from the structural actions accomplished by the Kingdom, he added. The APF President insisted that the Order of La Pléiade was awarded to the Monarch for his endeavors to promote the values of the rule of law, gender equality, individual freedoms and respect for all languages and cultures.
The order of La Pléiade, created in 1976 at the initiative of the Parliamentary Assembly of La Francophonie, is offered to people who particularly distinguish themselves in the service of the organization’s ideals of cooperation and friendship and promotion of the French language.