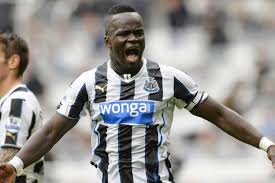 Ivorian international midfielder Cheick Tiote died of a heart failure while exercising with his Chinese club side, Beijing Enterprises on Monday.

Tiote who spent seven years at the Tyneside club with 150 appearances, including three last season, joined Chinese second-tier side, Beijing Enterprises, in February.

“It is with deep sadness I confirm that Cheick Tiote sadly passed away earlier today after collapsing in training,” spokesman Emanuele Palladino said.

“We cannot say any more at the moment and we request that his family’s privacy be respected at this difficult time. We ask for all your prayers,” Palladino added.

Beijing Enterprises said: “During a routine training session at 6pm today, Ivory Coast player Cheick Tioté suddenly fainted and the club immediately rushed him to hospital, but unfortunately efforts to save him failed and he passed away at 7pm”.

The football fraternity has been paying tribute to the former Newcastle and Anderlecht midfielder since the report of his death.

His manager at Newcastle, Rafa Benitez praised the player and described him as a true professional.

“It is with great sadness that I have this afternoon learnt of Cheick’s death. In all the time that I have known him, he was a true professional, dedicated and above all, a great man.
“Our hearts go out to his family and friends at such a sad time,” he added.

Born in Côte d’Ivoire, Tiote was part of the Ivorian squad that won the 2015 Africa Cup of Nations.

He began his professional career in Belgium with Anderlecht in 2005 before moving to Dutch side FC Twente and won the Eredivisie league title in the 2009-10 season.