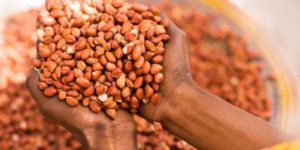 The Kaffrine region in central-western Senegal has harvested about 194,000 tons of groundnut during the winter, Samba Ndao Tall, the director of rural development, told the Senegalese News Agency (APS). The region harvested 198,000 tons a year earlier, it said.

According to Tall, the negative result is due to lower oilseed yields because of the precipitation that stopped early during the season, even though the area sown increased to 221,115 hectares (ha), Compared with 206,900 ha in 2015.

Confident about the 2017-2018 season, Tall indicated that a return to higher yields is expected, due to the Senegalese government’s strengthening of the production equipment in small agricultural equipment and tractors.

Some 1,270 tons of certified groundnut seed were made available to the Kaffrine region as part of this new campaign.

The west-African nation’s growing investment in agriculture (more than 10 percent of GDP per year) has opened the door for stronger, resilient food security. The country relies on sugar cane, millet, groundnuts, paddy rice and maize.