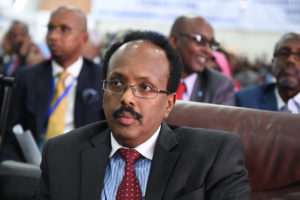 The Somali President has turned down the sum of $80m as a bribe in return for severing ties with Qatar and reinforcing the blockade imposed by Saudi Arabia, United Arab Emirates (UAE), Bahrain and several other Arab countries.

“After two hours of enticement, Farmajo rejected the tempting offer,” Jaber al-Harmi is quoted as saying.

Unnamed Somali sources told local media Somalia Today that “there was pressure on the Somali government by Saudi Arabia to reverse Somalia’s decision to stay neutral in the siege imposed by some Arab governments on the State of Qatar.”

Saudi Arabia is finger-pointed as one of bullying countries. Riyadh reportedly threatened to withdraw financial aid to the Somali government unless Somalia changes its neutral position.

Mogadishu has refused to severe ties with Qatar but rather called for dialogue to end the diplomatic rift between Qatar and the Saudi Arabia-led bloc.

Mogadishu has allowed Qatar to use its airspace and waters for commercial operations after the Saudi bloc imposed no fly zone to Qatari planes and banned vessels coming from and going to Qatar.

UAE is also named in the game of pressure on Somalia. Emirati officials have reportedly sought to impose their position to the Somali President Farmajo. During recent presidential elections won by President Farmajo, Abu Dhabi has reportedly backed his challenger and former leader Hassan Sheikh Mahmoud.

In what seems to be a response to Somalia’s neutrality, UAE hit back by expelling Somali competitor Ismail Madar from the Dubai International Quran competition on Monday, London-based The New Arab reports.

Madar was considered a top seed in the competition.

Qatar Foreign Minister Sultan Bin Saad Al-Muraikhi was in Mogadishu Sunday. He thanked Somali authorities for their neutral position and “encouraged Somali leaders to maintain their stance against the embargo on Qatar at any cost.”